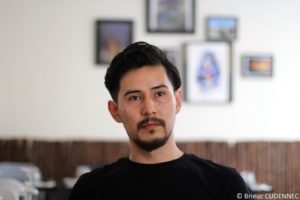 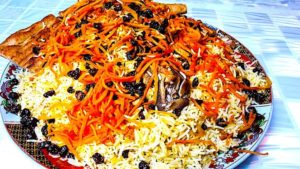 In Central Asia, Afghanistan is sadly well known as a war zone with the Taliban but it is still a country with a rich history and cuisine so special. Yes, the Afghan cuisine grew up with the perfumes of the Orient and the flavors of the West.

As an ‘eco-kitchen project’, The Kabul Kitchen (2, rue Saint-Sauveur, Paris 2) offers more knowledges about the Afghan cuisine. The restaurant is run by a Parisian woman, Fatima, and two former Afghan refugees.

Interview with one of them, Ali, to talk about cuisine and Afghanistan.

How could you describe the Afghan cuisine ?

The food in the Afghan culture is very important. Though in Afghanistan, there is simplz food, when we have some guests, we make special food which it takes a lot of time. It’s our way of honoring our guests. In my opinion, the Afghan cuisine is really tasty with a very long history and it deserves to be known.

In Afghanistan, there is a lot of different cultures but are there any common dishes ?

Every city and province has their own food. For instance, they eat a lot of beef in the North.  They cut big pieces of meat and put some including salt inside and they dry them in cold places.

Rice is everywhere in the Afghan cuisine but is it always served on the same way ?

It is similar but it’s never served on the same way. The Kabuli in Mazar is cooked with all the ingredients (carrots, meat, raisins, rice,…) but in other areas, they cook the rice differently.

It is told that cooking was only reserved for women under the Taliban’s regime. Was it a challenge for you to learn cooking?

When you learn something you like it’s never boring. When you cook, you want to improve yourself and it’s especially challenging with the Afghan food because it must be very tasty.

You were migrant in over all Europe.

I left Afghanistan in 2008 to Norway. I lived there till in 2012. My assignment was refused and I had to come back to Afghanistan. But before I get married in Norway so I really wanted to go back but I finally wasn’t allowed. I finally chose to go to France. When I came here, the authorities found out my finger prints

taken in Norway and wanted to send me back there. My wife moved to England and obviously I tried to join her. I came to Calais and was there for 3-4 months. Every night, I tried to go to England and I always failed. I had the idea to go to Belgium but it wasn’t successful either. I had to go back to Afghanistan but this time the pilot of the plane refused me. I had explained my story to him and I persuaded him to refuse me on his plane. Then I came back to detention. Norway didn’t accept my request but France did. I waited for the court decision and I met Fatima who asked me I wanted to work in an Afghan restaurant in Paris. And I finally joined the team. There are not many Afghan restaurants in Paris and our way to introduce our country to the people. Food is always a good excuse to talk about our country. Afghanistan has a very long history with many different cultures. It’s not only a warzone.

The restaurant has also a social aspect. You give the leftovers to the homeless. Is it important to help out those people who don’t still have to the chance to properly live?

We can not judge people sleeping in the streets. Humanity is paramount. We know nothing about their past, we can not help them offering a job but at least we could give some food. We don’t want to waste it so it’s our gift to the refugees and any people in need .

What is your favourite meal to cook?

The kabuli is my favourite one. It is really very popular in Afghanistan. Although it’s from Kabul, in many cities, they cook kabuli too but in different ways. Some people put everything (rice, raisins, carrots) together in one pot. Some put garlic too. «

Further informations (only in French) :